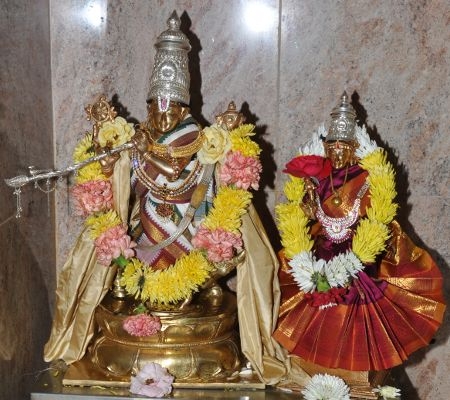 Šri Krishna along with His devotee who is a gopika (caretaker of the cows) called Šri Rãdhã. He is the ninth incarnation of Šri Vishnu. His birth was a miracle, and He continued to perform miracles all His life. He was a lovable child with the charisma that attracted everyone towards Him. He was always on the side of those who were dhãrmic.

He gave us the sacred scripture Bhagavad Gitã (The Lord’s song), containing the blue print for a righteous and spiritual living. Šri Krishna reminds us to do what we are supposed to do, to help those who are doing what is right, and also to strive towards a spiritual path. Šri Rãdha represents each one of us as an individual soul (jeevãtmã) longing to merge with Šri Krishna, the Supreme Soul (Paramãtma or Brahman).