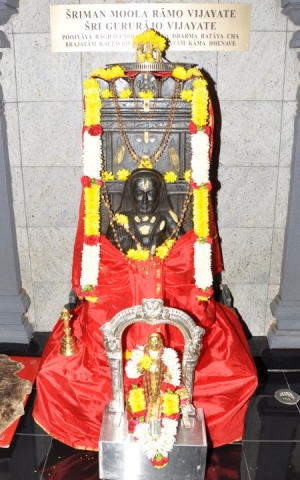 Šri Rãghavendra Swãmy (1595-1671) was a respected 16th century saint and guru (spiritual teacher) who advocated Šri Madhvachãrya’s dualism philosophy. He attained jeeva samãdhi (voluntarily stopped His breathing in deep meditation) and physically entered Brindãvana (a specially constructed stone enclosure) in the year 1671. His temples are called Mantrãlaya, and His presence can be felt blessing His devotees. A small vigraha of Šri Prahlãda, a child devotee of Šri Vishnu, is also placed in his sanctum as He is considered to be an incarnation of Šri Prahlãda